Motorcycle tyre of the year - Survey 2019

We asked, you answered - these are your motorcycle tyres of the year.

The motorcycle summer is now slowly but surely over and the golden autumn is approaching. During the course of the year, you have certainly covered a few kilometres with your bike, tested and ridden one or the other set of tyres. That's why we wanted you to tell us which is your personal motorcycle tyre of the year 2019.

A total of around 3,150 motorcycle enthusiasts from 10 countries took part in our survey and chose their favourite in 9 different categories.

The following international winners have emerged: 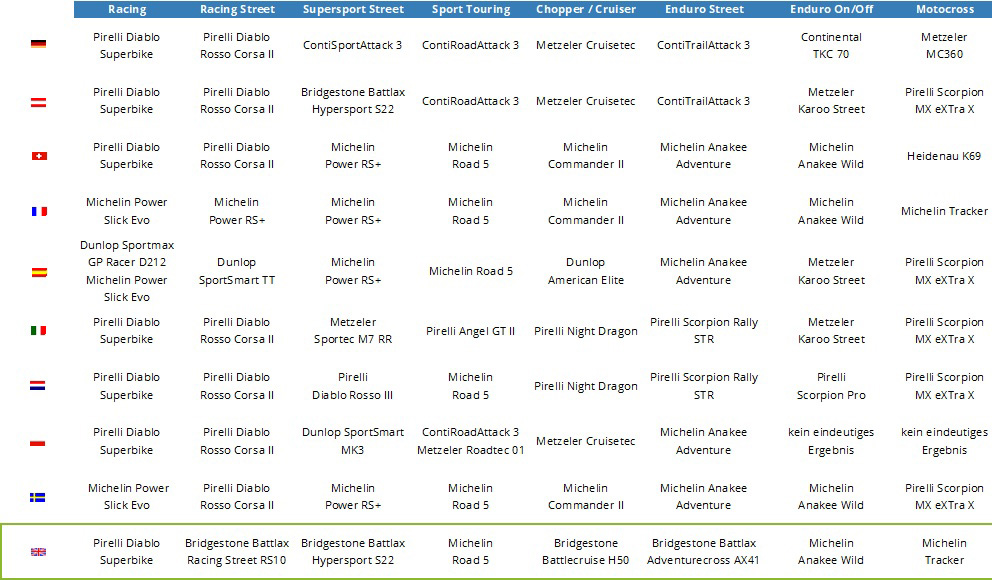 What is striking here is that the country of origin of the tyre manufacturer obviously has a clear relevance for its popularity in the respective country - motorcyclists from Germany, for example, prefer Continental and Metzeler, while French bikers swear by Michelin and Italian two-wheelers trust Pirelli.

Below you will find an overview of the results per tyre category in Germany: 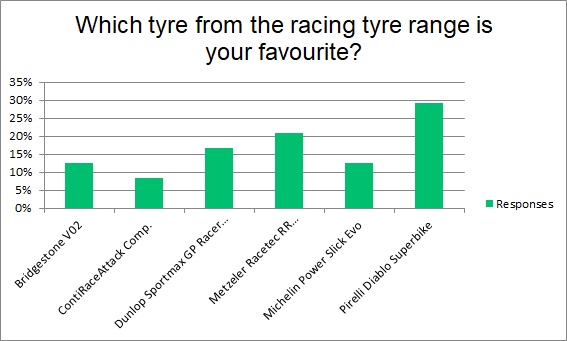 Here you can find the winner of the category Racing: Pirelli Diablo Superbike 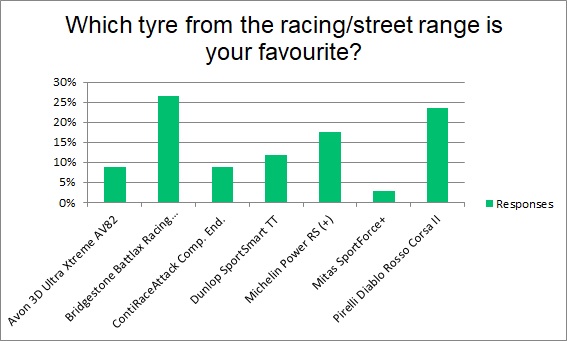 The Pirelli Diablo Rosso Corsa II won the Racing/Road category transnationally. With regard to this and the previous category, Pirelli underlines the apparently very good image in terms of sportiness. In France, on the other hand, the domestic manufacturer Michelin received the most votes with the Power RS(+). The Michelin tyre took second place with 32 per cent of all votes in all countries.

Here you can find the winner of the category Racing/Street: Bridgestone Battlax Racing Street RS10 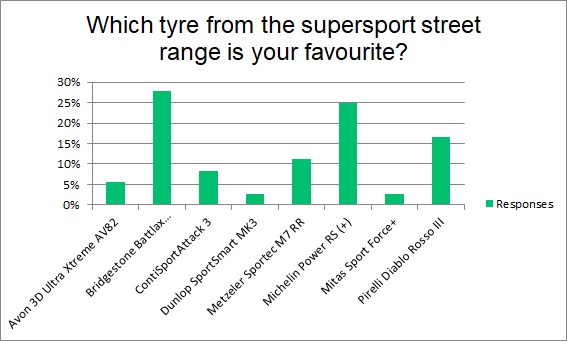 In this category you get a mixed international picture. Many different opinions of the participants do not show a clear overall winner. However, Michelin Power RS(+) is the most popular tyre in four countries such as France and Switzerland, although the Germans and Poles prefer the local Conti model.

Here you can find the winner of the category Supersport Street: Bridgestone Battlax Hypersport S22 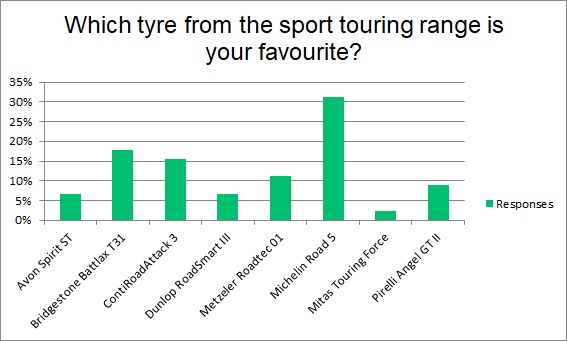 Although the Michelin Road 5 is the clear overall winner in six countries, including France with 42 percent of all votes, a clear majority in this category in Germany with 36 percent voted for the ContiRoadAttack 3 as Motorcycle Tyre of the Year. After the newly introduced Pirelli Angel GT II, the Michelin took third place.

Here you can find the winner of the category Touring: Michelin Road 5 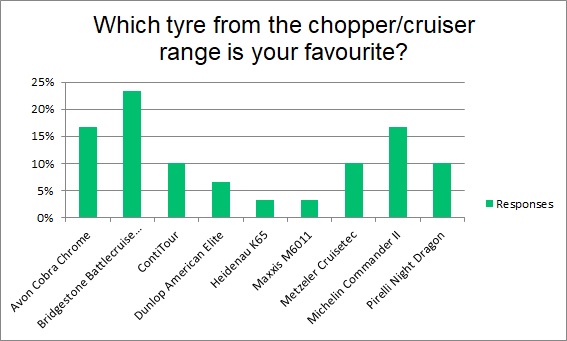 First place in this category was shared by Metzeler Cruisetec and Michelin Commander II, who were each preferred in three countries. From Metzeler's point of view, this is an impressive success, as the brand new Cruisetec has obviously positioned itself on the market within a very short time and can already compete with the established Commander II.

Here you can find the winner of the category Chopper/Cruiser: Bridgestone Battlecruise H50 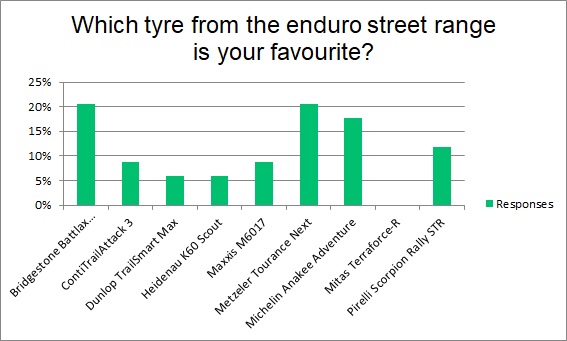 In the Enduro/Road segment, there is a preference for new products transnationally. In the UK, for example, the new Bridgestone Battlax Adventurcross AX41 was voted Motorcycle Tyre of the Year, as was the new Michelin Anakee Adventure in five countries, which also achieved overall victory with 38 percent of all votes. In Germany and Austria, on the other hand, the Conti model won with over 20 percent each, while in Italy and the Netherlands the motorcycle tyre of the year is called the Pirelli Scorpion Pro.

Here you can find the winner of the category Enduro Street: Bridgestone Battlax Adventurecross AX41 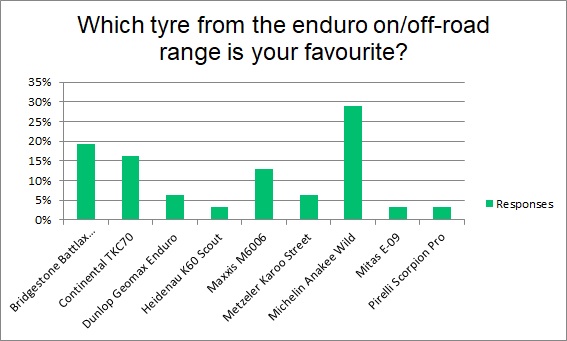 In this category the Conti model was particularly popular in Germany, Austria and Switzerland. In Germany, the alleged outsider Heidenau K60 Scout achieved a respectable second place. However, the Michelin Anakee Wild was the overall winner with 34 percent of the votes.

Here you can find the winner of the category Enduro On-/Offroad: Michelin Anakee Wild 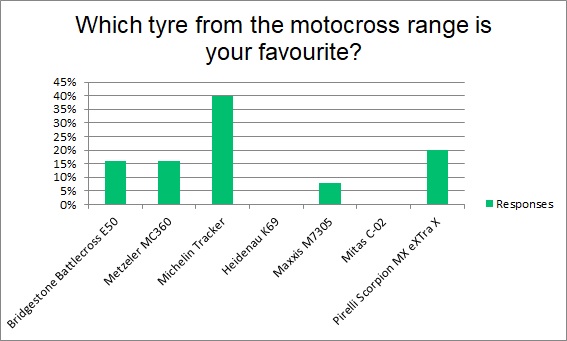 The brand loyalty of the respective compatriots is also evident in this category, albeit only slightly: in Germany, for example, the Metzeler tyre is only one percent ahead of the Pirelli Scorpion MX eXTra X. In five other countries, including Italy, the Pirelli leads the list. In France, the Michelin Tracker wins out here.

Here you can find the winner of the category Motocross: Michelin Tracker 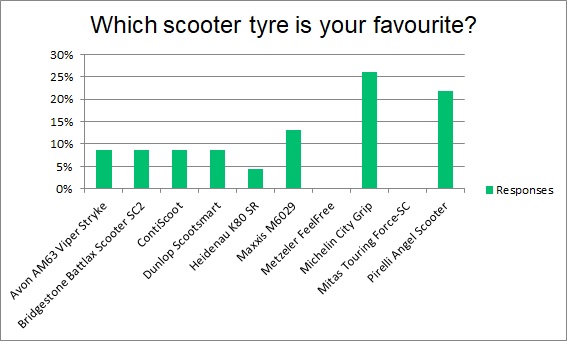 Here you can find the winner of the category Scooter: Pirelli Angel Scooter

Managing cookie setting
In order to offer you an optimal experience with the site, we use cookies. These are small text files that are saved on your computer. These include cookies for the operation and optimization of the page, as well as for services such as text or video chat, as well as for advertising based on your behavior on the Internet. For example, you can find out if you visit our website several times from the same device. We want to give you a choice of which cookies you allow:
Mandatory cookies
These cookies are necessary for navigating pages and using basic functions
necessary
Analytical cookies, marketing cookies, services of other companies (independent third-party providers)
Analytical cookies
These cookies help us better understand user behavior.
No
Yes
Marketing cookies
These cookies and similar technologies are used to display personalized and therefore relevant advertising content.
No
Yes
Privacy policy